Over the past several years J.P. Carlton has been working very closely with Sandvik on the development of the Razor Cutting System. Sandvik is one of the world’s largest producers of carbide cutting tools and a leader in carbide technology.

The J.P. Carlton Razor Cutting System uses a patented low profile design and unique bit design to increase cutting production and tool life. This low profile design increases efficiency by as much as 50%. This increased production is extremely apparent on any machine above 40 horsepower. This increase in efficiency can be attributed to a couple of design features. With the low profile design there is much less drag due to large pockets or teeth being driven through the wood, chips, or dirt. The placement of the teeth both around the perimeter and on the sides of the wheel does not permit wheel and pocket rub against uncut material.

Sandvik has worked extremely hard to come up with optimal hardness carbide for our application. By varying the amount of Cobalt in the Carbide and changing the thickness of the carbide Sandvik has developed a tool which is extremely durable. They have made the carbide hard to help keep its cutting edge and have made it thick to prevent it from shattering. These cutting tools not only last longer than any we have ever tested they can also be swapped from one side of the wheel to the other providing a second cutting edge.

The Razor Cutting System requires much less maintenance than current systems. There are only two different types of teeth used on the system – short shanked teeth on the perimeter and longer shanked teeth on the sides of the wheel. These Razor Teeth stick through the holders and though the wheel and are held in place by a nut on the other side. There are no allen head cap bolts as in other systems. Operators only need to remove the nut, pull out the tooth and replace it, no gauging required. Teeth may be swapped with ones from the other side of the wheel to prolong tool life. This simple process of replacing the tools greatly simplifies the maintenance procedure.

Our testing of the Razor Cutting System has proven it to induce less vibration into the machine under normal cutting. The low profile holders with little impacting against the stump greatly reduces the transmitted impact loads. This will prolong bearing and machine life.

This system has many advantages over all other systems currently incorporated. 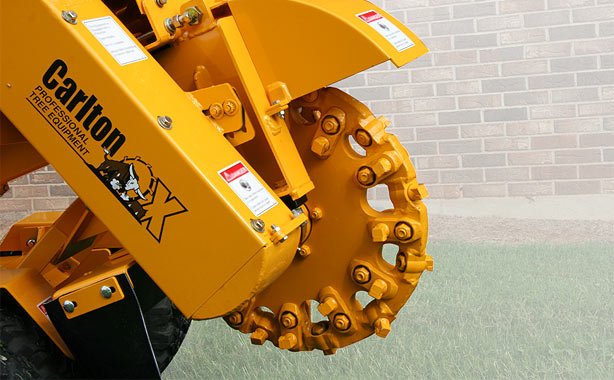